Life of St. Valentine of Rome

This saint was a priest of the Church, and put in chains by Claudius II. for having assisted the martyrs during the Emperor’s persecution of the Christians. Calpurnius, the prefect of the city, who had charge of him, intrusted him to the care of Asterius, his chief officer.

Valentine used his opportunity, and preached the faith to his guard, and restored sight to his adopted daughter. Asterius was converted and baptized with his whole family, and confirmed by a bishop named Callistus.

Claudius hearing this, condemned Valentine to be beaten with clubs, and afterwards beheaded. He suffered on the Flaminian Way, on February 14th, a.d. 269.

The body of S. Valentine is preserved in the Church of S. Praxedis, in Rome; but the head in that of S. Sebastian. Much difficulty is caused by the great number of relics of saints called Valentine, commemorated on the same day, but of whose acts nothing is known.

A common hagiography describes Saint Valentine, as the former Bishop of Terni, Narnia and Amelia, a town of Umbria, in central Italy. While under house arrest of Judge Asterius, and discussing his faith with him, Valentinus (the Roman pronunciation of his name) was discussing the validity of Jesus. The judge put Valentinus to the test and brought to him the judge’s adopted blind daughter.

If Valentinus succeeded in restoring the girl’s sight, Asterius would do anything he asked. Valentinus laid his hands on her eyes and the child’s vision was restored. Immediately humbled, the judge asked Valentinus what he should do.

Valentinus replied that all of the idols around the judge’s house should be broken, the judge should fast for three days, and then undergo baptism. The judge obeyed and as a result, freed all the Christian inmates under his authority. The judge, his family and his forty-four member household (family members and servants) were baptized.

Valentinus was later arrested again for continuing to proselytize and was sent to the prefect of Rome, to the emperor Claudius himself. Claudius took a liking to him until Valentinus tried to convince Claudius to embrace Christianity, whereupon Claudius refused and condemned Valentinus to death, commanding that Valentinus either renounce his faith or he would be beaten with clubs, and beheaded.

Valentinus refused and Claudius’ command was executed outside the Flaminian Gate February 14, 269. (Courtesy of Wikipedia)

There are several theories about the origin of Valentine’s Day celebrations that relate to love and sentiment.

Some believe the Romans had a mid-February custom where boys drew the names of girls in honor of the sex and fertility goddess, Februata Juno. Pastors “baptised” this holiday, like some others, by substituting the names of saints such as Valentine to suppress the practice.

Others maintain that the custom of sending Valentines on 14 February stems from the belief that birds begin to pair on that date; by 1477 the English associated lovers with the feast of Valentine because on that day “every bird chooses him a mate.” The custom of men and women writing love letters to their Valentine started on this day.

Other “romance” traditions have become attached to this feast, including pinning bay leaves to your pillow on Valentine’s Eve so that you will see your future mate that night in your dreams. 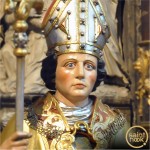