Life of St. Isidore of Seville

Copyright & Courtesy of NewAdvent.org | Please Donate to support them

Isidore was the son of Severianus and Theodora. His elder brother Leander was his immediate predecessor in the Metropolitan See of Seville; whilst a younger brother St. Fulgentius presided over the Bishopric of Astigi. His sister Florentina was a nun, and is said to have ruled over forty convents and one thousand religious.

Isidore received his elementary education in the Cathedral school of Seville. In this institution, which was the first of its kind in Spain, the trivium and quadrivium were taught by a body of learned men, among whom was the archbishop, Leander. With such diligence did he apply himself to study that in a remarkably short time mastered Latin, Greek, and Hebrew.

Whether Isidore ever embraced monastic life or not is still an open question, but though he himself may never have been affiliated with any of the religious orders, he esteemed them highly. On his elevation to the episcopate he immediately constituted himself protector of the monks. In 619 he pronounced anathema against any ecclesiastic who should in any way molest the monasteries.

On the death of Leander, Isidore succeeded to the See of Seville. His long incumbency to this office was spent in a period of disintegration and transition. The ancient institutions and classic learning of the Roman Empire were fast disappearing. In Spain a new civilization was beginning to evolve itself from the blending racial elements that made up its population.

For almost two centuries the Goths had been in full control of Spain, and their barbarous manners and contempt of learning threatened greatly to put back her progress in civilization. Realizing that the spiritual as well as the material well-being of the nation depended on the full assimilation of the foreign elements, St. Isidore set himself to the task of welding into a homogeneous nation the various peoples who made up the Hispano-Gothic kingdom.

To this end he availed himself of all the resources of religion and education. His efforts were attended with complete success. Arianism, which had taken deep root among the Visigoths, was eradicated, and the new heresy of Acephales was completely stifled at the very outset; religious discipline was everywhere strengthened.

Like Leander, he took a most prominent part in the Councils of Toledo and Seville. In all justice it may be said that it was in a great measure due to the enlightened statecraft of these two illustrious brothers the Visigothic legislation, which emanated from these councils, is regarded by modern historians as exercising a most important influence on the beginnings of representative government.

Isidore presided over the Second Council of Seville, begun 13 November, 619, in the reign of Sisebut. But it was the Fourth National Council of Toledo that afforded him the opportunity of being of the greatest service to his county.

At this council, begun 5 December, 633, all the bishops of Spain were in attendance. St. Isidore, though far advanced in years, presided over its deliberations, and was the originator of most of its enactments. It was at this council and through his influence that a decree was promulgated commanding all bishops to establish seminaries in their Cathedral Cities, along the lines of the school already existing at Seville.

Within his own jurisdiction he had availed himself of the resources of education to counteract the growing influence of Gothic barbarism. His was the quickening spirit that animated the educational movement of which Seville was the centre. The study of Greek and Hebrew as well as the liberal arts, was prescribed. Interest in law and medicine was also encouraged.

Through the authority of the fourth council this policy of education was made obligatory upon all the bishops of the kingdom. Long before the Arabs had awakened to an appreciation of Greek Philosophy, he had introduced Aristotle to his countrymen.

He was the first Christian writer to essay the task of compiling for his co-religionists a summa of universal knowledge. This encyclopedia epitomized all learning, ancient as well as modern. In it many fragments of classical learning are preserved which otherwise had been hopelessly lost.

The fame of this work imparted a new impetus to encyclopedic writing, which bore abundant fruit in the subsequent centuries of the Middle Ages. His style, though simple and lucid, cannot be said to be classical. It discloses most of the imperfections peculiar to all ages of transition. It particularly reveals a growing Visigothic influence. Arévalo counts in all Isidore’s writing 1640 Spanish words.

His contemporary and friend, Braulio, Bishop of Saragossa, regarded him as a man raised up by God to save the Spanish people from the tidal wave of barbarism that threatened to inundate the ancient civilization of Spain, The Eighth Council of Toledo (653) recorded its admiration of his character in these glowing terms:

“The extraordinary doctor, the latest ornament of the Catholic Church, the most learned man of the latter ages, always to be named with reverence, Isidore”.

This tribute was endorsed by the Fifteenth Council of Toledo, held in 688. 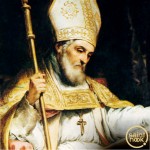