Life of St. Dorothea of Caesarea

This holy martyr was a native of Cæsarea in Cappadocia, and in the persecution of Dioclesian she was brought before the governor Sapricius.

After the usual interogatories she was stretched on the catasta, an iron bed over a slow fire. Then as laid thereon, the servant of God exclaimed, “Do thy worst, I fear not pain, if only I may see Him, for whose love I am ready to die.”

Sapricius said, “Who is he whom thou lovest?”

Sapricius asked, “And where is this Christ?”

Dorothy replied, “In His omnipotence He is everywhere; in His humanity he is in Heaven, the Paradise to which He invites us: where the woods are ever adorned with fruit, and lilies ever bloom white, and roses ever flower; where the fields are green, the mountains wave with fresh grass, and the springs bubble up eternally.”

Then said a lawyer present, named Theophilus, “Thou spouse of Christ, send me from Paradise some of these apples and roses.”

And Dorothy answered him, “I will.”

Now the governor pronounced sentence against her, that she should lose her head. And as she knelt, and the executioner prepared to smite, she asked him to delay the stroke for a moment. Then she prayed, and suddenly there stood by her a beauteous youth, in dazzling raiment, who held in his hands three apples, and three red roses, the like of which earthly garden had never produced.

Then Dorothy said, “I pray thee take these to Theophilus, and tell him that they are what I promised him.”

And at that instant the sword of the executioner fell, and she entered into the joy of her Lord.

Now Theophilus, the advocate, was at home with his companions; and to them he told with great laughter how he had asked the virgin to send him the flowers and fruit of the Paradise to which she hoped to enter. And, all at once, as he spake, the angel stood before him, with grave face, and held out to him the wondrous apples and roses, and said, “Dorothy sends these to thee, as she promised.”

Then Theophilus believed, and going before the governor, he confessed Christ, and was sentenced to death; and so died, receiving the baptism of blood. 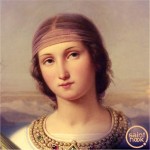