Life of St Casimir of Poland

From his life, compiled by Zachary Ferrier, legate of Leo X in Poland, thirty-six years after his death and an authentic relation of his miracles, with many circumstances of his life by Gregory Swiecicki, canon of Vilna; also the commentary of Henschenius, p. 337.

St Casimir was the third among the thirteen children of Casimir III, King of Poland, and of Elizabeth of Austria, daughter to the Emperor Albert II, a most virtuous woman, who died in 1505. He was born in 1458, on the 3rd of October.

From his childhood he was remarkably pious and devout. His preceptor (tutor) was John Dugloss, called Longinus, canon of Krakow, a man of extraordinary learning and piety, who constantly refused all bishoprics and other dignities of the church and state which were pressed upon him.

Uladislas, the eldest son, was elected King of Bohemia in 1471, and became King of Hungary in 1490. Our saint was the second son; John Albert the third son, succeeded the father in the kingdom of Poland in 1492; and Alexander, the fourth son, was called to the same in 1501.

Living in the Divine Presence

Casimir and the other princes were so affectionately attached to the holy man, who was their preceptor, that they could not bear to be separated from him. But Casimir profited most by his pious maxims and example. He consecrated the flower of his age to the exercises of devotion and penance, and had a horror of that softness and magnificence which reign in courts His clothes were very plain, and under them he wore a hair shirt.

His bed was frequently the ground, and he spent a considerable part of the night in prayer and meditation, chiefly on the passion of our Saviour. He often went out in the night to pray before the church-doors; and in the morning waited before them till they were opened to assist at matins.

By living always under a sense of the divine presence he remained perpetually united to, and absorbed in, his Creator, maintained an uninterrupted cheerfulness of temper, and was mild and affable to all. He respected the least ceremonies of the church: everything that tended to promote piety was dear to him. He was particularly devout to the passion of our blessed Saviour, the very thought of which excited him to tears, and threw him into transports of love.

He was no less piously affected towards the sacrifice of the altar, at which he always assisted with such reverence and attention that he seemed in raptures. And as a mark of his singular devotion to the Blessed Virgin, he composed, or at least frequently recited, the long hymn that bears his name, a copy of which was, by his desire, buried with him.

His love for Jesus Christ showed itself in his regard for the poor, who are his members, to whose relief he applied whatever he had, and employed his credit with his father, and his brother Uladislas, King of Bohemia, to procure them succour. His compassion made him feel in himself the afflictions of every one.

A Rally to War

The Palatines and other nobles of Hungary, dissatisfied with Matthias Corvin, their king, son of the great Huniades, begged the King of Poland to allow them to place his son Casimir on the throne.

The saint, not then quite fifteen years of age, was very unwilling to consent; but in compliance with his father’s will he went, at the head of an army of twenty thousand men, to the frontiers in 1471.

There hearing that Matthias had formed an army of sixteen thousand men to defend him, and that all differences were accommodated between him and his people, and that Pope Sixtus IV had sent an embassy to divert his father from that expedition, he joyfully returned, having with difficulty obtained his father’s consent so to do.

However, as his dropping this project was disagreeable to the king his father, not to increase his affliction by appearing before him he did not go directly to Krakow, but retired to the Castle of Dobzki, three miles from that city, where he continued three months in the practice of penance.

Having learned the injustice of the attempt against the King of Hungary, in which obedience to his father’s command prevailed upon him to embark when he was very young, he could never be engaged to resume it by fresh pressing invitation of the Hungarians, or the iterated orders and entreaties of his father.

The twelve years he lived after this he spent in sanctifying himself in the same manner as he had done before. He observed to the last an untainted chastity, notwithstanding the advice of physicians who excited him to marry, imagining, upon some false principle, this to be a means necessary to preserve his life.

Being wasted with a lingering consumption, he foretold his last hour, and having prepared himself for it by redoubling his exercises of piety, and receiving the sacraments of the church, he made a happy end at Vilna, the capital of Lithuania, on the 4th of March, 1484, being twenty-three years and five months old.

He was buried in the Church of St. Stanislas. So many were the miracles wrought by his intercession that Swiecicki, a canon of Vilna, wrote a whole volume of them from good memoirs in 1604.

He was canonized by Pope Leo X, whose legate in Poland, Zachary Ferrier, wrote the saint’s life. His body, and all the rich stuffs it was wrapped in, were found quite entire, and exhaling a sweet smell one hundred and twenty years after his death, notwithstanding the excessive moisture of the vault.

It is honoured in a large rich chapel of marble, built on purpose in that church.

St. Casimir is the patron of Poland and several other places, and is proposed to youth as a particular pattern of purity.

His original picture is to be seen in his chapel in St. German des Prez in Paris, built by John Casimir, King of Poland, the last of the family of Waza, who, renouncing his crown, retired to Paris, and died Abbot of St. Germain’s in 1668.

(Taken from Vol. III of “The Lives or the Fathers, Martyrs and Other Principal Saints” by the Rev. Alban Butler, the 1864 edition published by D. & J. Sadlier, & Company) Provided Courtesy of: Eternal Word Television Network 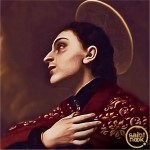