Life of St. Agatha of Sicily

One of the most highly-venerated virgin martyrs of Christian antiquity, Agatha was put to death during the persecution of Decius (250-253) in Catania, Sicily, for her steadfast profession of faith. Her written legend comprises “straightforward accounts of interrogation, torture, resistance, and triumph which constitute some of the earliest hagiographic literature”.

Although the martyrdom of Saint Agatha is authenticated, and her veneration as a saint had spread beyond her native place even in antiquity, there is no reliable information concerning the details of her death.

According to Jacobus de Voragine, Legenda Aurea of ca. 1288, having dedicated her virginity to God, fifteen year old Agatha, from a rich and noble family, rejected the amorous advances of the low-born Roman prefect Quintianus, who then persecuted her for her Christian faith. He sent Agatha to Aphrodisia, the keeper of a brothel. The madam finding her intractable, Quintianus sends for her, argues, threatens, and finally has her put in prison.

Amongst the tortures she underwent was the cutting off of her breasts. After further dramatic confrontations with Quintianus, represented in a sequence of dialogues in her passio that document her fortitude and steadfast devotion. Saint Agatha was then sentenced to be burnt at the stake, but an earthquake saved her from that fate; instead, she was sent to prison where St. Peter the Apostle appeared to her and healed her wounds.

Saint Agatha died in prison, according to the Legenda Aurea in “the year of our Lord two hundred and fifty-three in the time of Decius, the emperor of Rome.” 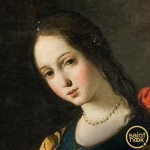