Life of St. Ignatius of Antioch

Ignatius was a convert and disciple of S. John the Evangelist. He was appointed by Saint Peter to succeed Evodius in the See of Antioch, and he continued in his bishopric full forty years.

He received the name of Theophorus, or one who carries God with him. In his Acts, Trajan is said to have asked him why he had the surname of God-bearing, and he answered, because he bore Christ in his heart.

The See of Antioch

Socrates, in his “Ecclesiastical History,” says, “We must make some allusion to the origin of the custom in the Church of singing hymns antiphonally. Ignatius, third bishop of Antioch in Syria from the apostle Peter, who also had conversed familiarly with the apostles themselves, saw a vision of angels, hymning in alternate chants the Holy Trinity; after which he introduced this mode of singing into the Antiochian Church, whence it was transmitted by tradition to all the other churches.”

It seems probable that Evodius vacated the see of Antioch about the year 70. There are traditions that represent Evodius to have been martyred; and Josephus speaks of a disturbance in Antioch about that period, which was the cause of many Jews being put to death. There is a difficulty in supposing Peter to have appointed Ignatius bishop of Antioch, if he did not succeed Evodius till the year 70.

But it is probable, that later writers have confounded the appointment of Ignatius to the see of Antioch with his consecration to the episcopal office; and it is highly probable that he received this from the hands of the Prince of the Apostles.

The date of the martyrdom of Ignatius can be fixed with tolerable certainty as occurring in the year 107 AD. The Acts expressly state that Trajan was then at Antioch, and that Sura and Senecio were consuls: two events, which will be found to meet only in the year 107.

Brought before the Emperor

Trajan made his entry into Antioch in January; his first concern was to examine into the state of religion there, and the Christians were denounced to him as importers of strange gods. Ignatius was brought before him, and boldly confessed Christ to be God.

“Dost thou mean Him who was crucified?” asked the emperor, scornfully.

Ignatius answered, “The very same, Who by His death overcame sin, and enabled those who bear Him in their hearts to trample under foot all the power of the devils.”

Then Trajan ordered him to be taken to Rome, and exposed to wild beasts in the amphitheatre. It was generally a distinction reserved for Roman citizens, that if they had committed an offense in the provinces, they were sent for punishment to the capital. This, however, does not appear to have been the reason in the case of Ignatius.

The punishment to which he was condemned was generally reserved for culprits of the lowest condition; and the Christians were perhaps viewed in this light by the heathen. Ecclesiastical history has scarcely preserved a more interesting and affecting narrative, than that of the journey of Ignatius from Antioch to Rome.

In tracing the procession of the martyr to his final triumph, we forget that we are reading of a prisoner who was dragged to his death in chains. He was committed to a guard of ten soldiers, who appear to have treated him with severity; and, after taking ship at Seleucia, they landed for a time at Smyrna. He had here the gratification of meeting with Polycarp, bishop of that See, and who, like himself, had enjoyed a personal acquaintance with Saint John.

His arrival also excited a sensation through the whole of Asia Minor. Onesimus, bishop of Ephesus; Polybius, bishop of Tralles; and Demas, bishop of Magnesia, came from their respective cities, with a deputation of their clergy, to visit the venerable martyr. Ignatius took the opportunity of writing from Smyrna to the Churches over which these bishops presided; and his epistles to the Ephesians, Trallians, and Magnesians, are still extant.

Hearing also of some Ephesians, who were going to Rome, and who were likely to arrive there more expeditiously than himself, he addressed a letter to the Church there. His principal object in writing was to prevent any attempt which the Roman Christians might have made to procure a reprieve from the death which was awaiting him. He expresses himself not only willing, but anxious, to meet the wild beasts in the amphitheatre; and there never, perhaps, was a more perfect pattern of resignation than that which we find in this letter.

From Smyrna he proceeded to Troas, where he was met by some of the neighbouring bishops, and the bishop of Philadelphia became the bearer of a letter which he wrote to the Christians in that city. He also wrote from the same place to the Church of Smyrna; and the personal regard which he had for Polycarp, the bishop of that see, will explain why he also wrote to him, and made it his dying request that he would attend to the Church of Antioch.

These seven epistles, which were written by Ignatius from Smyrna and Troas, are still extant.

Last Day of the Games

It appears that Ignatius had intended to write letters to some other Churches, from Troas; but his guards were impatient to proceed, and once more setting sail, they followed the course which Saint Paul had taken upon his first journey into Greece, and landed at Neapolis. Hurrying through Macedonia, he embarked once more on the western coast of Epirus, and crossing the Adriatic, arrived at Rome.

There was now an exhibition of games, which lasted some days; and it seems to have been intended that the death of Ignatius should form part of the spectacle. The voyage had been hurried on this account; and on the last day of the games, which was the 19th December, the holy martyr was led into the amphitheatre, and his death seems to have been the work of a moment. In his letter to the Roman Church, he had prayed that the wild beasts might despatch him speedily, and not refuse to touch him, as had sometimes been the case.

His prayer was heard; and the Christians of Rome, who had thought themselves blessed to have even seen the apostolic bishop of Antioch among them, had now to pick up a few of the larger and harder bones, which was all that the wild beasts had spared.

These were carried to Antioch, and it is evidence of the great reverence at that early age shown to the relics of the saints, that the same honors were paid to the sacred relics as had been paid to the holy martyr himself, when he touched at the different cities.

The friends of Ignatius speak of his remains as “an invaluable treasure;” and as such they were deposited near one of the gates in the suburbs of Antioch.

The relics of S. Ignatius were retranslated to Rome, and are dispersed among several of the churches of the city. The head, however, is in the possession of the Jesuits of Prague. 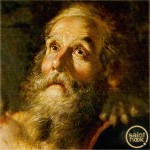