Life of St. Joseph of Bethlehem

Second only to Mary, Saint Joseph is the person that spent the most earthly hours and days with Jesus. The names of his mother and father have been lost to history – unknown.

Genealogical research shows he was of the house of David, lineage through Solomon. Also lost to history are the date and place of St. Joseph’s birth and the date of his death, so his chronological age is always based upon guesswork. The Christmas story tells us he and Mary had to return to Bethlehem for the census, so we know there is some sort of direct connection to that community, whether at birth or later years.

We learn some details of St. Joseph’s life through teachings about his dreams and from encounters with angels.

The first is when he is assured by an angel in a dream that he is to take Mary as his wife, so we know he was single at that point. Whether he was a widower with children from a prior marriage is a possibility, but there is not current agreement from biblical scholars on that point. That point fuels great discussions as to whether siblings of Jesus were direct siblings or were through a prior marriage of St. Joseph.

Eight days after his birth, St. Joseph brings Jesus to the temple for circumcision, a requirement of the Jewish faith. At this time, St. Joseph gives the baby the name “Jesus” and takes legal paternal custody, just as he was instructed by an angel in his dream.

An inexact few years later, an angel instructs St. Joseph to flee with his family to Egypt to elude death from Herod. Later, a dream angel guides St. Joseph to return to the district of Galilee, which he does and creates a family home in the village of Nazareth. What is an exceptional fact about Saint Joseph’s life is that he never speaks in any parts of the Bible. Therefore, we come by these angel appearances and instructions by second-hand, and never directly from the source, which hopefully was Saint Joseph himself in each instance.

Once settled in Nazareth, with Jesus of an unknown age though certainly still in boyhood, Saint Joseph supports the family as a carpenter. Just as we have in today’s society, carpentry had many sub-specialties in Jesus’ time (framer, rough carpenter, etc.).

We are told St. Joseph worked in a carpentry “shop” where Jesus was often with St. Joseph and sometimes worked in the shop. It is not sure that St. Joseph owned the shop, but in any event by today’s lingo, he apparently was a “finish” carpenter. Imagine the amount of influence, the direction, the correction, and the formation that Saint Joseph provided to the boy Jesus.

Aside from Mary, no other human that has ever lived spent more personal time in direct contact with God, through his anointed son Jesus.

The last time we encounter Saint Joseph is in the description of Jesus in the temple in Jerusalem at the age of twelve. Mary and Joseph had departed from Jerusalem to return home amidst a large entourage heading in the same general direction. His parents assumed Jesus was in the entourage and were shocked to learn otherwise, and it is described St. Joseph and Mary returned to the temple and safely brought Jesus home. Imagine the human fatherly “instruction” Saint Joseph undoubtedly gave to Jesus on that occasion.

And that’s it, an abrupt end of biography of Saint Joseph. He is never mentioned again in Scripture.

What happened in those 18 years is completely unknown to factual history.

The Body and Tomb of St. Joseph

“In an ecstasy, a Saint has seen the body of St. Joseph preserved intact in a tomb, the site of which is yet unlnown. The more the glorious spouse of the most Blessed Virgin is honored, the sooner will the finding of his body take place, which will be a day of great joy for the Church.” (Words of Father Paul of Moll, 1824-1896, from Father Paul of Moll, by Edward van Speybrouck, p.238).

An ancient tradition states that the tomb of St. Joseph, now empty, is in the Valley of Josaphat.

St. Jerome, on the other hand, was of the opinion that St. Joseph’s tomb is within the boundaries of the Garden of Gethsemane. (See Life and Glories of St. Joseph by Edward Healy Thompson, pp.409-410)

St. Joseph’s Virtues Words of Our Lady to St. Bridget of Sweden

“St. Joseph was so reserved and careful in his speech that not one word ever issued from his mouth that was not good and holy, nor did he ever indulge in unnecessary or less than charitable conversation. He was most patient and diligent in bearing fatigue; he practiced extreme poverty; he was most meek in bearing injuries; he was strong and constant against my enemies; he was the faithful witness of the wonders of Heaven, being dead to the flesh and the world, living only for God and for Heavenly goods, which were the only things he desired. He was perfectly conformed to the Divine Will and so resigned to the dispositions of Heaven that he ever repeated” May the Will of God ever be done in me!” He rarely spoke with men, but continually with God, whose Will he desired to perform. Wherefore, he now enjoys great glory in Heaven.” 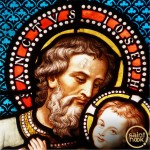