Life of St. Scholastica of Nursia

Famous wherever the name of S. Benedict, her brother, is known. Authorities for her life, the same as those for his. The following sketch of her life is extracted from Montalembert’s Monks of the West.

In the history of most saints who have exercised a reformatory and lasting influence upon monastic institutions, the name and influence of some holy woman is almost invariably found associated with their work and devotedness.

These bold combatants in the war of the Spirit against the flesh seemed to have drawn strength and consolation from a chaste and fervent community of sacrifices, prayers, and virtues, with a mother or a sister, by blood or choice, whose sanctity shed upon one corner of their glorious lives a ray of sweeter and more familiar light.

To instance only the greatest: Macrina is seen by the side of S. Basil, and the names of Monica and Augustine are inseparable; as in later ages are those of S. Francis of Assisi and S. Clara, S. Francis of Sales and S. Jeanne Chantal. S. Benedict had also a sister, born on the same day with himself, named Scholastica; they loved each other as twins often love, with fraternal regard, elevated into a passion. But both loved God above all.

Earlier than her brother, Scholastica had consecrated herself to God from her infancy; and, in becoming a nun, she made herself the patroness and model of the innumerable family of virgins who were to acknowledge, adopt, and follow the code of her brother. She rejoined him at Monte Cassino, and established herself in a monastery, in the depths of a valley near the holy mountain.

Benedict directed her from afar, as he did many other nuns in the neighbourhood. But they met only once a year, and then it was Scholastica who left her cloister, and sought her brother. He, on his side, went to meet her: they met upon the side of the mountain, not far from the door of the monastery, in a spot which has long been venerated.

There, at their last meeting, occurred that struggle of fraternal love, and the austerity of the rule, recorded by S. Gregory, which is the only known episode in the life of Scholastica, and which has insured an imperishable remembrance to her name. They had passed the entire day in pious conversation, mingled with praises of God. Towards the evening they ate together.

While they were still at table, and the night approached, Scholastica said to her brother, “I pray thee, do not leave me to-night, but let us speak of the joys of heaven till the morning.”

“What sayest thou, my sister?” answered Benedict; “on no account can I remain out of the monastery.”

Prayed up a Storm

Upon the refusal of her brother, Scholastica bent her head between her clasped hands on the table, but prayed to God, shedding torrents of tears, to such an extent, that the table was flooded with them.

The weather was very serene: there was not a cloud in the air. But scarcely had she raised her head when thunder was heard, and a violent storm began; the rain, lightning, and thunder were such, that neither Benedict, nor any of his brethren, who accompanied him, could take a step beyond the roof that sheltered them. Then he said to Scholastica, “May God pardon thee, my sister, but what hast thou done?”

“Ah, yes,” she answered him, “I prayed thee, and thou would’st not listen to me; then I prayed God, and he heard me. Go now, if thou canst, and send me away, to return to thy monastery.”

He resigned himself, against his will, to remain, and they passed the rest of the night in spiritual converse.

Saint Gregory, who has preserved the tale to us, adds that it is not to be wondered at, that God granted the desire of the sister rather than that of the brother, because, of the two, it was the sister who loved most, and that those who love most have the greatest power with God.

In the morning they parted, to see each other no more in this life. Three days after, Benedict, being at the window of his cell, had a vision, in which he saw his sister entering heaven under the form of a dove. Overpowered with joy, his gratitude burst forth in songs and hymns to the glory of God.

Her body was translated to Le Mans, in France, of which city she is patroness, but her relics were dispersed by the Huguenots, in 1562. However, some portions have been preserved, some in the Jesuit Church at Antwerp, and a bone in the Carthusian Church at Cologne. 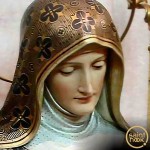