She was born in Mornese, in what is now the province of Alessandria, northern Italy, to a peasant family who worked in a vineyard.

When she was fifteen she joined the Association of the Daughters of Mary Immaculate, run by her parish priest, Father Pestarino; it was a precursor to the founding of the Salesian Sisters.

The Daughters were known for their charitable works and Mary soon set herself apart for her sound judgment, dedication, joy, and love of the young. Wherever she went the village children were drawn to her like a magnet, eager to hear her stories, or to ask her a multitude of questions about the Christian faith.

When she was 23 a typhoid epidemic hit Mornese and villagers started rapidly dying. Soon her uncle and aunt were taken ill and Mary volunteered to care for them and their many children.

After a week they were healed, but when she returned home Mary became ill with typhoid herself. She received the last rites of the Church and recovered, but the illness left her weak. The strength which had formerly sustained her in the fields was no more. Mary was now thin and frail; a shell of her formerly robust self.

Her practicality led her to find other means to sustain herself, so she took an apprenticeship with the town seamstress and worked diligently at the craft. Like St John Bosco, the skills which she learned in her youth she was later able to pass onto those who would come after her.

After she recovered from her illness, in the month of October, Mary was walking in her village and was suddenly astounded to see before her a large building with a courtyard and many girls playing and laughing. A voice said to her, “I entrust them to you.”

At the same time St John Bosco had a similar experience where he was shown a group of girls abandoned in a courtyard. The same voice said to him, “These are my daughters; take care of them.”

Mary was to become the co-founder of a religious order to care for young girls, just as the Salesian priest and brothers cared for young boys.

Fifteen young women now comprised the Daughters of Mary Immaculate. Fr Pestarino had busied himself with training them in the spiritual life and managed to secure a place for some of them to live in community, thus was the beginning of religious life in Mornese.

The Daughters took in a few young girls and housed them, schooling them in the faith and handing down to them their knowledge of dress making.

Don Bosco was told of the Daughters by Fr Pestarino, who himself was training as a Salesian of Don Bosco under the saint. Considering his vision of the young girls, Don Bosco decided to meet with them. He went to Mornese with his boy band under the guise of raising funds for his Oratory, but his true intention was to investigate the possibility of founding a female counterpart of the Salesian Sisters from the Daughters of Mary Immaculate.

In 1867, after meeting with them and receiving the Daughters’ enthusiastic response to his proposal, Don Bosco drew up their first rule of life. A source of the community’s good spirit, sense of humor, optimism and charity, Mary Mazzarello was a natural choice as the first superior, although she did all that she could to not accept the title. Eventually obedience won out and she was the first Mother of the young community at age thirty, albeit in an informal sense.

After much formation, struggles, the well-intentioned but misdirected advice of others, and difficulties with the townspeople (whose school for boys which they had raised money for and built was turned over to the Daughters for their work by Don Bosco), the day of their profession arrived.

The fifteen young women, led by Mary Mazzarello, professed their vows as religious women in the presence of the Bishop of Acqui, their spiritual father Don Bosco, and Fr Pestarino. July 31, 1872 was the birthday of the new religious family.

At age thirty-five, donned in a habit, she was now Sister Mary Mazzarello. She and the fourteen other newly professed religious sisters made up the fledgling order.

Mary was asked by Don Bosco to temporarily fulfill the role of superior until he could call together a council of the sisters to for an election.

As the feminine branch of the Salesian religious family, the Daughters of Mary Help of Christians sought to do for girls what the priests and brothers were doing in Turin for boys. They brought to their ministry the particular feminine genius which lends itself so well to nurturing, teaching, and encouraging the young along the way of salvation and personal growth; they became well loved by the townsfolk.

After being elected Mother General of the Salesian Sisters, Mary Mazzarello felt that it was important that she and the other sisters have a good understanding of how to read and write; it was a skill which many of them had never had the opportunity to acquire.

Her dedication to her sisters was not limited to their intellectual development alone. In every way she was an attentive mother, which is why to this day she is still fondly referred to as “Mother Mazzarello” by the Salesian Sisters.

When several of the sisters were headed to the South American missions, she accompanied them to their port of call in Genoa, Italy, and then took a boat to France so that she could visit the sisters there.

In Marseilles their ship broke down and had to be repaired. All of the passengers were forced to disembark while it was dry docked. Although the Sisters had been told that lodging had been prepared for them, there was a mix-up and they were left without beds to sleep on.

Mother Mazzarello was not one to let events such as that discourage her so she took the sheets that they brought with them stuffed them with straw, and made makeshift beds for all of them.

After a miserable night of sleep they all awoke, but Mother Mazzarello could not get up. A fever was ravaging her body and she was in terrible pain. The next morning, more out of a concern for worrying her already exhausted companions, she was able to get up, see the missionaries off, and then journey with her remaining Sisters to their house and orphanage in St. Cyr.

Once in St. Cyr she fainted and was in bed for forty days; the diagnosis was pleurisy. Eventually she returned to Italy, even though the doctor told her not to. She said that she wanted to die in her own community. She made her return journey in stages, as she did not want to push herself too much; she was painfully aware of her delicate condition. Fortunately on one of her stops Don Bosco was near and they were able to meet for the last time.

In early April, Mary returned to Mornese. Her native air strengthened her and since she felt stronger she insisted on keeping the community schedule and doing her usual work. Unfortunately it was too much for her and she relapsed. Near the end of April it seemed that death was coming for her.

Finally, in the pre-dawn hours of May 14, 1881, Mother Mazzarello began her death agony. After receiving the last rites she turned her attention to those around her and weakly whispered, “Good-bye. I am going now. I will see you in heaven.”

Shortly after she died at the age of forty-four.

She was beatified on November 20, 1938 and canonized on June 24, 1951. Her incorrupt body is venerated in the Basilica of Our Lady Help of Christians, in Turin, Italy. 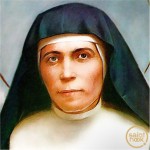