Life of St. Maroun of Syria

Saint Maroun, born in the middle of the 4th century was a priest who later became a hermit, retiring to a mountain of Taurus near Antioch. His holiness and miracles attracted many followers, and drew attention throughout the empire. St John of Chrysostom sent him a letter around 405 AD expressing his great love and respect asking St Maroun to pray for him.

He lived generally in the open with no shelter. When he found a pagan temple, he dedicated it to God and made it his oratory. He spent his nights standing in prayer. He was known to have the gift of healing, both physical and of vices. He founded monasteries and trained monks in Syria and Lebanon.

St Maroun is considered the Father of the spiritual and monastic movement now called the Maronite Church. This movement had a profound influence on Northern Syria and Lebanon. Saint Maroun spent all of his life on a mountain in the region of Cyrrhus in Syria. It is believed that the place was called “Kefar-Nabo” on the mountain of Ol-Yambos, making it the cradle of the Maronite movement.

The Maronite movement reached Lebanon when St Maroun’s first disciple Abraham of Cyrrhus who was called the Apostle of Lebanon, realised that paganism was thriving in Lebanon, so he set out to convert the pagans to Christians by introducing them to the way of St Maroun. The followers of St Maroun, both monks and laity, always remained faithful to the teachings of the Catholic Church.

St Maroun embraced the quiet solitude of the mountain life. He lived his life in open air exposed to the forces of nature such as sun, rain, hail and snow. His extraordinary desire to come to know Gods presence in all things, allowed St Maroun to transcend such forces and discover an intimate union with God. He was able to free himself from the physical world by his passion and fervor for prayer and enter into a mystical relationship of love with God.

A mystic,  he started a new ascetic-spiritual method that attracted many people in Syria and Lebanon to become his disciples. Accompanying his deeply spiritual and ascetic life, he was a zealous missionary with a passion to spread the message of Christ by preaching it to all he met. He sought not only to cure the physical ailments that people suffered, but had a great quest for nurturing and healing the “lost souls” of both pagans and Christians of his time.

This missionary work came to fruition when in the mountains of Syria, St Maroun was able to convert a pagan temple into a Christian Church. This was to be the beginning of the conversion of Paganism to Christianity in Syria which would then influence and spread to Lebanon. After his death in the year 410 AD, his spirit and teachings lived on through his disciples. 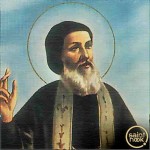