Blaise, was bishop of Sebaste, a city of Cappadocia, in the Lesser Asia. He spent a great part of his time in retirement on a hill not far from the city, whither he withdrew, after the duties of his office were finished, to be alone with God.

During the persecution of the Christians in the reign of Diocletian, he lay concealed for some time in this retreat; but was at last taken and brought before Agricolaus, the governor of the province, and confessing himself a Christian, was thrown into prison. After enduring many tortures, he received the crown of martyrdom in the beginning of the fourth century.

Healer of men and animals; according to legend, sick animals would come to him on their own for help, but would never disturb him at prayer.

Agricola, governor of Cappadocia, came to Sebaste to persecute Christians. His huntsmen went into the forests of Argeus to find wild animals for the arena games, and found many waiting outside Blaise’s cave. Discovered in prayer, Blaise was arrested, and Agricola tried to get him to recant his faith. While in prison, Blaise ministered to and healed fellow prisoners, including saving a child who was choking on a fish bone; this led to the blessing of throats on Blaise’s feast day.

Thrown into a lake to drown, Blaise stood on the surface and invited his persecutors to walk out and prove the power of their gods; they drowned. When he returned to land, he was martyred by being beaten, his flesh torn with wool combs (which led to his association with and patronage of those involved in the wool trade), and then beheading.

Some historians refer this event to the year 316, under the reign of Licinius. Seven holy women and two young children suffered at the same time. The Acts of his martyrdom are so untrustworthy that it is not possible to state any further particulars which are authentic.

The Council of Oxford, a.d. 1222, prohibited servile labour on this day. Its observance in England was marked by several curious ceremonies. Among others a taper used to be offered at High Mass; and it was lately the custom in many parts of England to light bonfires on the hills on S. Blaise’s night.

Some have affirmed that these usages arose from a pun on the Saint’s name (sc. “blaze”); but this seems clearly erroneous, as they are not peculiar to England.

In some parts of Germany, Blaise’s Day is called “Little Candlemas Day,” because of the bonfires that it was usual (for an uncertain reason) to kindle on that night. At Bradford, Yorkshire, a festival is held every five years in memory of Blaise. 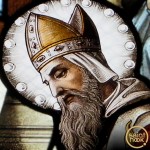