Life of St. Conrad of Piacenza

He was born Corrado Confalonieri, a member of one of the noblest families of Piacenza, in the town of Calendasco, a fiefdom of his family. The date of his birth, however, is uncertain. He married an aristocratic young woman named Ephrosyne when he was quite young, and, though pious, he led the standard way of life for a man of his station.

One day, when he was engaged in his usual pastime of hunting within his family’s domain, he ordered his attendants to set fire to some brushwood in which game had taken refuge. The prevailing wind caused the flames to spread rapidly, and the surrounding fields and forest were soon in a state of conflagration.

A peasant who happened to be found near the place where the fire had originated was accused of being the author of the blaze and was imprisoned, tortured to confess and condemned to death. As the poor man was being led to execution, Conrad, stricken with remorse, made an open confession of his guilt to the Signoria of the city. As punishment for this and in order to repair the damages he had caused, the city seized all his possessions, sparing his life due to his noble status.

Thus reduced to poverty, and seeking penance for his act of cowardice, Conrad and his wife saw the hand of God in this event. As a result, in 1315 they agreed to separate and Conrad retired to a hermitage near the town of Calendasco, joining a community of hermits, who were Franciscan tertiaries, while his wife became a nun of the Order of Poor Clares at their monastery in the city.[1]

Conrad soon developed a reputation for holiness, and the flow of visitors left him unable to keep the solitude he sought. He then embarked on the life of a pilgrim, going to Rome, and from there to the Holy Land and Malta and, about 1340, to Palermo in Sicily, where he was directed to an isolated site in the Val di Noto.

After many years of an itinerant life, he settled there in a grotto now named for him and for the rest of his life spent a most austere and penitential life of solitude, working numerous miracles, and gifted with prophecy.

In 1343 Conrad felt called by God to serve the local people more directly and in 1343 went to the city of Netum, where he cared for the sick at the Hospital of St. Martin there for the next two years. He lived in a hermitage attached to the Church of the Crucified Christ occupied by the Blessed William Buccheri, a former equerry to King Frederick III of Sicily, who had also taken up a life of solitude and prayer.

Conrad would regularly return to his grotto for silent prayer. His fame was such that in 1348 the Bishop of Syracuse, Giacomo Guidone de Franchis, went to his hermitage to beg his prayers for the relief of a famine afflicting the island.

Conrad died while in prayer, kneeling before a crucifix, on 19 February 1351, the day he had predicted. At his request, his body was buried at the Church of St. Nicholas, the principal one of the city. After the city was leveled in an earthquake in the 1690s, it was transferred to the new church of the same name built in the relocated city, now called Noto, which now serves as the cathedral of the region. 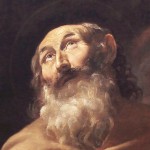